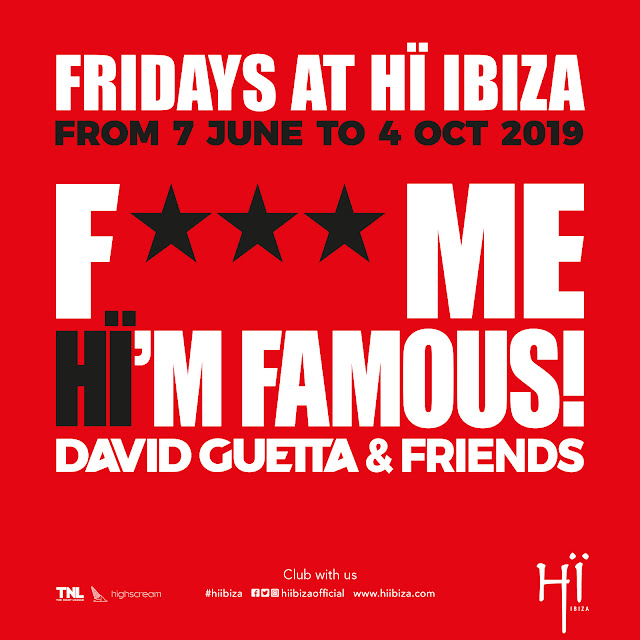 The Night League, the team behind award-winning club Hï Ibiza, today reveals the line-up for  David Guetta’s ‘F*** Me I’m Famous!’ The residency will take over Friday nights at Hï Ibiza in 2019, running from Friday 7 June - 4 October 2019 and includes a selection of the biggest names in electronic dance music including Afrojack, Bon Sinclair, Don Diablo, Lost Frequencies, MK and Oliver Heldens.

F*** Me I’m Famous! was created by Cathy and David Guetta and is without a doubt one most talked about events in the world. Often selling out within hours of being on sale, the party has become an Ibiza institution. Known for its unbeatable feel-good atmosphere, incredible production, fierce dancers, unrivalled VIP glamour, and of course the world’s biggest DJ’s in the booth each week, F*** Me I’m Famous! is a force to be reckoned with.

This news follows the announcement of Jack Back, David Guetta’s underground alias and a brand new concept for 2019. Taking over the Hï Ibiza club (room 2) Jack Back will celebrate the best of the underground electronic music scene. Curating a failsafe roster of the very best names in underground electronic music, Jack Back will see David Guetta and weekly resident Idris Elba playing alongside the most sought after names in the international music scene. With the line-up for this soon to be announced, watch this space as this year’s F*** Me I’m Famous!’ is poised to blow the roof off the club.

Tickets are now on sale at hiibiza.com